In honor of today, I decided to post the pictures from Hero Day on Friday.  The whole ceremony was amazing.  The choir (Ursa Major-Mazie’s choir) sang a few songs including the National Anthem.  The first graders sang a lovely song.  The second graders also sang a wonderful song.  The students presented the firefighters (which our neighbor-the lieutenant of Ladder 17-was the only one there), the police officers, and the military with banners complete with signatures from all the students.  It really was great to see the Odyssey community come together like that.

On our way in, the Pinwheels for Peace were displayed along the fence.  Apparently schools throughout the country are doing this.  Pretty spectacular if you ask me!

After the ceremony (didn’t take my flash so no pictures of the ceremony), Jacob quickly found dad among the large number of military present…not a great picture but you get the point…

Then it was onto the parade of Heroes…

The students made handmade cards for the heroes.  The heroes were given bags to collect all the cards.  I know what it means to Jeremiah to read these great cards.  I also know that it means so much to the heroes who received them.

And one of my hero with his biggest fans! 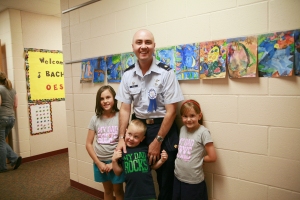 Mazie asked what really happened on this day 10 years ago.  I have recorded a dateline special for the kids to watch because I can’t put it into words that would make her get the magnitude of the events that went on that day.  She and Jamie also have asked what I was doing that day when it was all happening.  I remember it so very clearly.  I had just gotten to work that morning.  I worked at Dr. Chatterji’s office (a GI specialist).  His wife happened to be at work already and just turned on the news like she did every morning.  She turned it on just in time for us to see the plane crash into the second World Trade Center tower.  We couldn’t believe what we were seeing.  Dr. Chatterji had heard a report that a plane was heading to the Sears tower where their son worked.  So Mrs. Chatterji was trying to call her son while I watched in disbelief.  I was also very pregnant with Mazie at the time.  A million things went through my head all at the same time.  How could this be happening?  How does this change things?  Why?  What was going to happen now?  What was happening to all those people in the towers?  What about their families?  It was surreal and I was thankful Jeremiah was locked down on base.

I am thankful for all the Heroes who were directly and indirectly helping that day and since that day.  I am thankful.

One thought on “Hero Day”