Archive for the tag “Mazie Monday”

Have I mentioned that Mazie signed up for band?  Well, she did and wanted to play the flute.  So we took my old flute to the music store to have the key pads replaced and it polished up for her.  Mazie was so excited to get started on it.

When school started they didn’t need to bring their instruments until the following week.  So last Monday was easily Mazie’s favorite day of the year because she was taught to put the flute together and actually blow a sound out of it.  Then came Tuesday when she was taught her very first note.  She worked on new things all last week and spent time this weekend showing off her mad skills on Skype…

Mazie has been so excited about making music.  She’s actually not bad for making her first note last week!  She’s already on to piecing several notes together with rests while keeping a beat and counting… 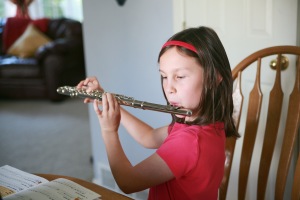 I’m pretty impressed.  She has mentioned that band is her favorite class each day.  She asked me for help on a note today and asked if I could play it for her so she could hear it.  While I am not conditioned to play for long periods of time anymore, I was able to do a scale for her.  She was pretty impressed, I think. 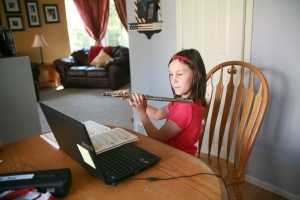 Band, both concert and marching, were so important to me when I was in school.  I am so glad I get to share a little of that with Mazie.  It’s nice to see her so excited, even more than she gets with algebra II or science!  So I tell her to keep up all the tooting.  It will all pay off soon.

Since Mazie’s birthday fell on a weekday, she had her big party on Saturday.  This meant there are way too many photos to share here so I did a little collage that sums up the few days of birthday celebrating going on around here.

1. Mazie’s favorite cake, strawberry with strawberry icing. We had cupcakes while she enjoyed her star. 2. The birthday banner. 3. Yep, she’s nine! 4. Loving that Pop Pop was on skyping, singing along with the rest of us. 5. Blowing out all 9 candles. 6. Excited for her new mini-laptop. 7. She had a lot of funny expressions while opening gifts.  This one was the best! 8. Pop Pop joining us on skype! 9. Mazie jumping into the pit at Ariel’s gym. 10. Jacob rolling one of Mazie’s friends in the ball. 11. Jamie enjoying a ride on the rope swing. 12. Mazie with THE boy *sigh*. 13. Jacob enjoying extra attention from Mazie’s friend. 14. The relay race that Mazie’s team one! 15. THE boy. 16. The Mickey Birthday cake (see more of this on the cake site).

Now onto the date.  I feel this deserves its own special attention since it’s, well, special.  Mazie looks forward to her date with dad every year.  This year she understood that he has been teaching her how a boy should treat her on a date (in the distant future, of course).  So it wasn’t just about spending time with dad (although she was really looking forward to that part of it too), she waiting for him to open doors for her instead of rushing to do it herself.  She let him treat her like a lady!

Plus she was really looking forward to whether the flowers she was expecting would be pink!  I can’t believe she’s nine. 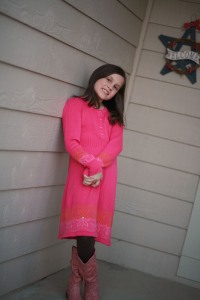 I pity the boy who doesn’t come to the door with at least one flower in his hand for her.  I also pity him if he doesn’t treat her well.  Actually, I don’t really pity him.  He just doesn’t get another chance, I think.  She won’t go out with him if he doesn’t show some chivalry right away!  That’s how it should be, right?