So today the girls had their parties.  It happened to be a half day which meant their parties were at the same time.  No worries though…Jacob and I had a blast at Jamie’s party.  Jacob and Jamie colored (together) a candy cane and put it together.  Jamie decorated a sugar cookie and cut it in half for Jacob to share.  They shared a plate of food too.  After a bunch of treats (read: way too many) were handed out, it was time to leave for the day! 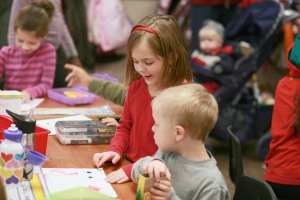 While we were having fun at Jamie’s party, Jeremiah went to Mazie’s party.  The fourth graders had a project ready to go.  They were building graham cracker houses.  Mazie said she couldn’t quite figure out how to make a pointy roof with the graham crackers so her house became an apartment.  It did take the entire hour of the party to create this living palace but it was fun to watch… 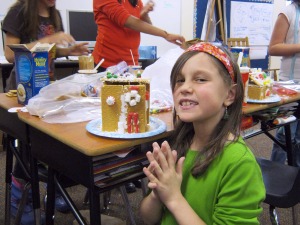 So now we’ve started our two weeks of Winter break and we’ve got a few things planned over those two weeks!

2 thoughts on “Christmas Parties 2 and 3”