Many of you know that Jeremiah and I are high school sweethearts.  But you may not know how that happened.  So this is about how we started.

January 1994…We were in BioChem class together and we were dissecting minks…their biology is the same as a house cat but it apparently wasn’t cruel to kill minks for science…anyway, most of you know this part…His mink “George” wrote my mink “Henrietta” a note.  It was in my box one morning and it basically was his mink telling my mink to put in a good word for him.  Jeremiah called me and asked me out for two weeks later.  In his defense, he did have to ask his mom for the car for a date with a girl.  However, what high school girl has plans for two weeks out?  I guess that part of his plan worked.  I was free!  We went on a total of 4 dates, one of them being our junior prom.  Then we didn’t date.  It was just bad timing.  I liked him.  He liked me.  We just didn’t connect.

Fast forward to the start of our senior year, September 1994.  The summer was good.  It was time to start the best year ever!  I played field hockey and was ready for the season to start.  School, concert band, marching band, hockey all kept me busy.  Jeremiah was busy with school and both bands as well.  We happened to be trying out for district band together.  We had most of our classes together.  He decided to ask me out again.  This time it was not for two weeks later.  We started dating November 20, 1995 and we’ve been together ever since.  I am so glad he took the chance and asked me out again! 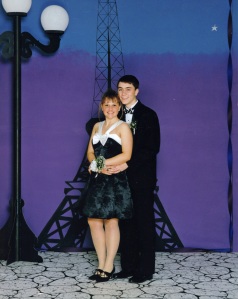 Yikes, 18 looks so young!  But I can still see that in our eyes from tonight when I snapped this with my phone…

Maybe 17 years isn’t so long after all.  Thanks for asking me out for a second time, Jeremiah.  I love you!

Posted in Family and tagged anniversaries, love, us

3 thoughts on “Then and Now”