On Tuesday, May 21, the kindergarten class had a music/promotion ceremony.  It was at the end of the school day and Jacob was just so excited about the whole thing.  He went to bed Monday night stating “After tomorrow, I will be a first grader”.  *Sigh*  This year has gone by so fast.  And he has enjoyed every bit of kindergarten.

He even wanted to wear a button shirt for his special day.  Those who know Jacob know how big that is.  He also decided he was going to wear slacks instead of jeans and his “date shoes”!  So he went to school dressed rather handsome and we joined him in the afternoon for his promotion ceremony.

When the curtain opened the kids were under strict instruction to not wave at their parents because they were big kids now and big kids don’t do that.  Maybe 2 or 3 kids actually waved!  Jacob just gave me a big smile.

The kids performed a few songs based on nursery rhymes with a bit of a twist.  For example one of their songs was titled “Gettin’ Down with Mama Goose”.  They were jammin’ and singing their hearts out.  It was a great music program! 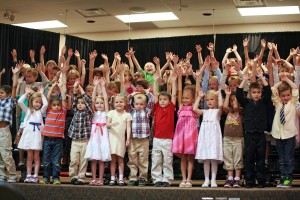 Then came the promotion part.  There are four kindergarten classes.  Jacob’s class was the last to call their students for their certificates.  The teachers also went in alphabetical order.  Jacob’s class was last to go and he happens to be the last name in the class.  So he was the last student called to accept his certificate.  Don’t worry about Jacob’s self-esteem.  He was cheering (loudly) for all his friends in his class and since he was last got a big round of applause from all the parents. 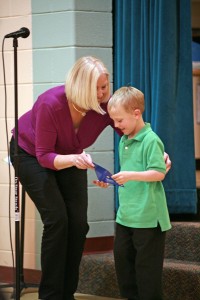 It actually fit that Jacob was called last.  It was like it was supposed to be that way.  He certainly didn’t mind! 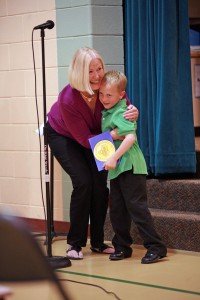 The next day several people (including a couple of teachers) mentioned about how great Jacob was cheering on his friends.  I just smiled and said, “yep, that’s my son!” 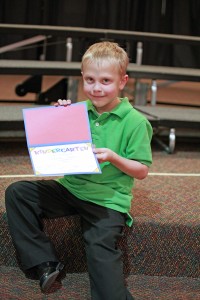 We were able to get a picture of Jacob and his teacher (who taught her last year this year).  We hope you have a fabulous retirement, Mrs. Walker! 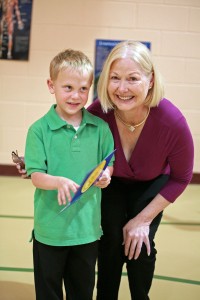 So now it’s official.  No more kindergarteners in this house.  Sniff, sniff.  Man, it’s hard growing up!  We love you , Little Man!!