On Thursday, Jamie’s class put on three Thanksgiving plays at the Reader’s Theater.  The kids read their parts aloud to the entire crowd and believe me when I say there was a big crowd of proud parents!

After the first two plays were over it was Jamie’s group’s turn.  Her play was entitled The Ugly Turkey (some of you may remember when Mazie did this play in first grade and she was the Ugly Turkey).  For those of you who know the story of the ugly duckling it is similar but with turkeys and a peacock instead of ducks and swans.  Anyway, Jamie was Turkey #2! 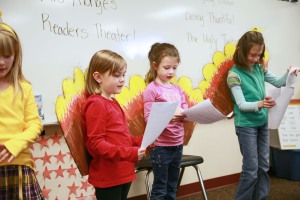 It was so great to hear her reading so fluently out loud.  She did a great job as did all the students!  One thing I am thankful for this year…kids who love to read!