1.  Jacob got Dino Dig for Christmas.  It’s basically a block of plaster that holds a dino skeleton that he has to excavate.  He loves it!

2.  While Pop Pop was here in December, Jeremiah and I were able to get away for 4 days!  We went to Las Vegas and had a blast. 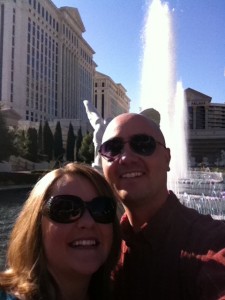 This is the longest I’ve been away from any of the kids besides Mazie when we went to Hawaii and she was 18 months old.  The kids had a blast with Pop Pop all to themselves too!

He’s not a fan of wearing his hair in spikes but was excited to do something with his hair when he found out other kids in his class were doing it too.  He’s one cool little man, I tell you. 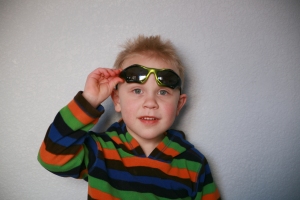 4.  I’m working on Mazie’s stargazer lilies that she wants on her birthday cake. 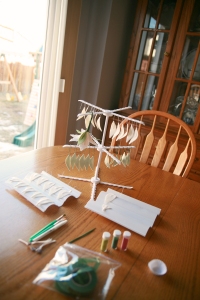 It takes a little time for all those petals and leaves to dry so I can put them all together.  All of that will be put together to make four lilies.  I already had one done so she will have 5 on her cake.

5.  Jacob is a little excited about having 10 girls (not including myself) in the house Thursday night.  He keeps saying things like, “I hope they don’t love me too much” or “I can’t wait until the girly night”.  I don’t have the heart to tell him that he will be sleeping with Dad upstairs while I stay with the girls on the main level.

7.  She ordered cheese burgers for her birthday dinner on Friday and will be going out with Dad on Saturday.

8.  Jamie has been so excited about school lately.  This is to say, she comes home from school and actually tells me about her day.  It’s nice.

9.  Our mailman jammed three boxes in the package bin of our mailbox yesterday.  They were our packages.  By jammed, I mean that I actually had to practically damage one to get them out.  I almost chased him down to make him open the whole thing to get them out.  I don’t know why he does that.

10.  I got a Kindle Fire for Christmas.  I love it!  I’ve read 5 books on it so far.  I just finished the Hunger Games trilogy and highly recommend it if you haven’t read it already.  Anyone got any suggestions on good reads?

One thought on “Ten On Tuesday”