1.  Hello?  My name is Megan and it’s been two weeks since I’ve blogged.  There I said it.  Let get on with blogging, shall we?

2.  Every January, Jacob’s preschool has a “Dinner with Dads”.  It’s a spaghetti dinner that the church and teachers put together to celebrate dads since they aren’t in school over Father’s Day.  I have to say that I’m not really sure who was more excited about it…Dad or Jacob.  And, in this house, we have to get the silly one out of the way first…

Aren’t they handsome?  Jacob even wore a shirt with buttons!  Anyone who knows Jacob knows that this is huge for him.  He hates buttons.  So he dressed nicely and even picked out a button shirt for dad to wear.  They went to dinner.  One of Jacob’s teachers took this one…

As you can see, the kids had crafts made.  Jacob made a tent and set up a camping area.  The teachers helped him glue his head to figures (pop sticks) and he was fishing and sleeping in the tent!  It sits in Jeremiah’s office at the Academy today.

3.  The girls had a crazy hair day last week.  Jamie opted for 8 pony tails!  Mazie decided to use almost every clip they own and one pony. 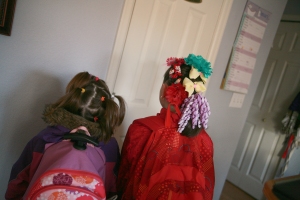 When they turned around for me to take the picture Mazie giggled at herself and said, “I have no idea why I’m smiling when the camera is behind me.”  When it was bath time, Mazie counted 16 clips and found one when she was washing her hair.  So she used 17!

4.  We’ve adopted Pizza Friday from our good friends in Minnesota.  It’s just easier always knowing what is for supper at least one day a week.  The kids got a little creative the last time I made the dough and opted for shaped pizzas…

There is a small oval cheese pizza, a small diamond cheese pizza without sauce, and a small heart pizza with black olives.  I’ll let you figure out which one when to which kid.

5.  The kids were supposed to have a half day on Friday and it was cancelled due to snow! It was a fun snow day and a three-day weekend.  They even got to play in snow for a little.  It’s mostly gone now though.

6.  The kids had dental appointments last week as well.  They all had great check ups.  No cavities which means they were each able to bang the gong…

I was only able to get Jacob doing it and he did take a running start to hit the gong really loud! (which is why he’s blurry)

7.  I am currently reading The 5 Love Languages by Gary D. Chapman.  It’s fascinating and I think it should be read by more people before they get married.  Maybe our country’s divorce rate wouldn’t be so high if they did!  Just sayin’.

8.  I am addicted to Pinterest.  There are so many cute crafty things I want to do but just don’t have the time.  I need an extra day a week just set aside for the things I would love to try.

9.  Does anyone know about the “Cake Bill” here in Colorado?  There are a few representatives that have put together a bill to allow people to sell cakes and cookies out of their home instead of owning a store front.  (Yep, that means I’ve been doing it illegally)  It was passed by the Colorado House of Representatives last week!  It moves onto the Colorado Senate (tentatively) on Friday.  It would be nice to be legitimate for the first time since November 2009!  I’m keeping my fingers crossed.

10.  Jeremiah and I made homemade fortune cookies on Sunday.  His firsties (seniors at the Academy) are getting their bases tomorrow at a dinner.  Jeremiah thought of the idea to put the base coordinates on a strip of paper and put it into the cookie.  I know that he is a dork ;-).  I found a recipe that seemed tasty.  It took almost the whole afternoon since we could do only two at a time but they turned out pretty cool.  The kids had the three that were left over and said they were tasty.

2 thoughts on “Ten On Tuesday”