1.  Can you believe it’s October?  Most of my September, at least in pictures, went down with another hard drive.  I apparently had a string of bad luck with computers over the last year+ but I’m feeling lucky this time with this new computer!  Things you won’t see…the balloon festival pictures, the kids writing their Christmas lists, and some every day things that I wanted to put here on the blog.

2.  I’m going to start with Landsharks.  The kids did the Fall XC series.  There was a 1/2 mile division (Jacob), 1 mile division (Jamie), and a 1 1/2 mile division (Mazie).  They ran their hearts out each week and had a blast but Jacob has already said he likes the short sprint series in the Spring better.  I’m guessing he’s not going to be much of a distance runner!  But here they are, proud as can  be with their medals.  Even the dogs joined in the fun… 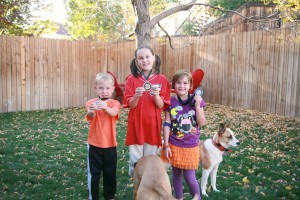 3.  Jacob is going on his very first field trip tomorrow.   They are going to the Colorado Pumpkin Patch.  To say he is excited is a bit of an understatement.  He told me tonight when I was tucking him in to bed that he just wanted to jump out his window so he could get there now.  I suggested that he get a good night sleep.  So far I have not heard any jumping out of any second story windows!

4.  Mazie has FACS this semester.  It stands for family and consumer services or better known as home ec.  She will correct you every time you say home ec, however.  She made a pillow and was so proud that she let her teacher display it for the whole school to see.  That was after she was able to bring it home to show it off…

She is also cooking.  She’s made cinnamon knots and french toast.  I hear there is going to be some tasty grilled cheese tomorrow.  She’s enjoying it!

5.  I had to take Jamie to the doctor today because of stomach pain.  Since she was running a low-grade fever and had pain at her belly button, I was worried that it was appendicitis.  Jamie had her blood drawn (for the first time), gave a urine sample (“Ewe gross, I peed on my hand”), and had an x-ray of her abdomen (“Oh cool, there is a laser on my belly”).  All to find it is something viral.  While I am thrilled to have my mine put at ease and that it isn’t serious, I really could use those 3 hours we were at the academy back.  Jamie had a blast with all the tests but I’m pretty sure she would be good to not have to do any of it again.

6.  Mazie was bullied at school last week.  It was totally random and completely caught her off guard.  She was in Western Hemisphere (social studies) and there was a substitute teacher.  She asked the girl (who has sat beside her since the beginning of the year) for help on one of their problems about the bill of rights.  The girl looked at Mazie and said that she was going to beat her up after school.  Mazie went to her next class and told that teacher (who she trusts) and she took Mazie to the office to get it all straightened out.

7.  Do you want to know when Mom found out about all of this?  If you said after school, you guessed correctly.  Western Hemisphere was 3rd period (way before lunch) and I had to hear about it from Mazie.  Not the principal.  I was a little upset at that part.  So I called the principal immediately after school last Monday when I found out about the situation to find out what was being done with the whole thing.  I didn’t get a call back until Tuesday afternoon (and two more calls later) to find out that actions were taken.  I couldn’t have the specifics because of legal reasons according to the principal.  Mazie was a little nervous about going to school on Tuesday and I couldn’t put her at ease.  Thankfully her teacher (the one she went to in the first place) was looking out for her and emailing me throughout the day to let me know she was ok.

8.  Mazie said that by Thursday the other girl involved apologized to her.  I am happy that it wasn’t anything more than a verbal threat but a little upset by the events that followed.  The good thing out of all of this is that Mazie now knows how to handle that sort of situation.  We’ve learned to diffusion bullying in taekwondo but that is usually if someone comes up to you and calls you a name.  This totally threw her off guard but she did the right thing and is confident again in her abilities to diffusion any bullying situation.

9.  I have taught my last cake decorating class.  I have classes scheduled for October but not enough interest for the classes to run.  I’m a little sad about not teaching.  I enjoyed it and I think I was pretty good at teaching the skills to other people.  But I want to enjoy the kids’ functions and not worry about whether or not they conflict with a class for the rest of the school year.  It just seems like too much to do with a move coming next June.

10.  I am so excited to see the leaves changing colors.  It’s simply gorgeous around here.  I am not, however, ready for the temperatures coming Thursday through Saturday.  The highs are to be in the low 50s.  Yikes!  We went from Summer to Winter in a week.  Gotta love Colorado weather.  If you don’t like it, wait 5 minutes!

2 thoughts on “Ten On Tuesday”