Mazie graduated from the 5th grade and is enjoying her summer before starting middle school. 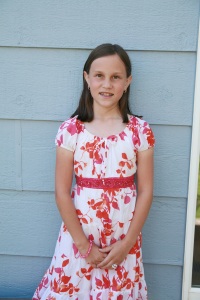 There I said it. It’s out there now making it very real. It’s taken me a while to come up with the words for this post.  It’s a milestone no one warns you about.  It creeps up on you and then you are it in the face with it. While I am extremely proud of Mazie for enjoying elementary school and doing so well in her classes, I was not prepared for the emotion of her going onto middle school.

On a beautiful May morning, Odyssey Elementary held a graduation ceremony for their nearly 90 5th graders.  The principal handed each student their certificate with came with a lovely photo of the student in a cap and gown in a leather cover. 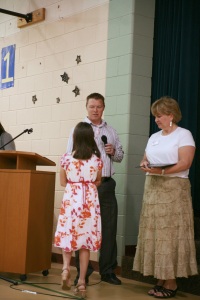 Each 5th grade teacher called their students up one at a time for their diplomas.  Mazie’s class was last, making them the “best class”.  Mazie was pretty proud of herself… 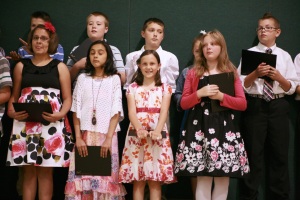 The Mom, Dad, and Pop Pop-erazzi were pretty proud of her too.  Then the teachers went onto the awards.  They gave awards for the top students in each class who scored the highest scores in the Scantron testing for math, language arts, science, and reading.  We had no idea Mazie was receiving an award.  She found out and didn’t tell us.  She got the highest score in her class for language arts! 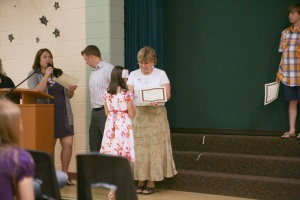 I was so surprised and this is where I almost lost my control.  But I didn’t cry.  I was so proud of her as she was for herself.  Then they marched back out of the auditorium and went to the cafeteria for a little reception.

And that was the end.  She was officially finished with her elementary education.  And Mazie became an official 6th grader ready for middle school. 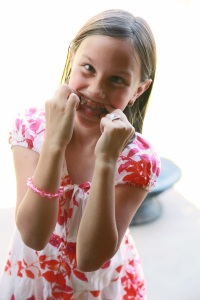 We are so very proud of you, Mazie Moo!